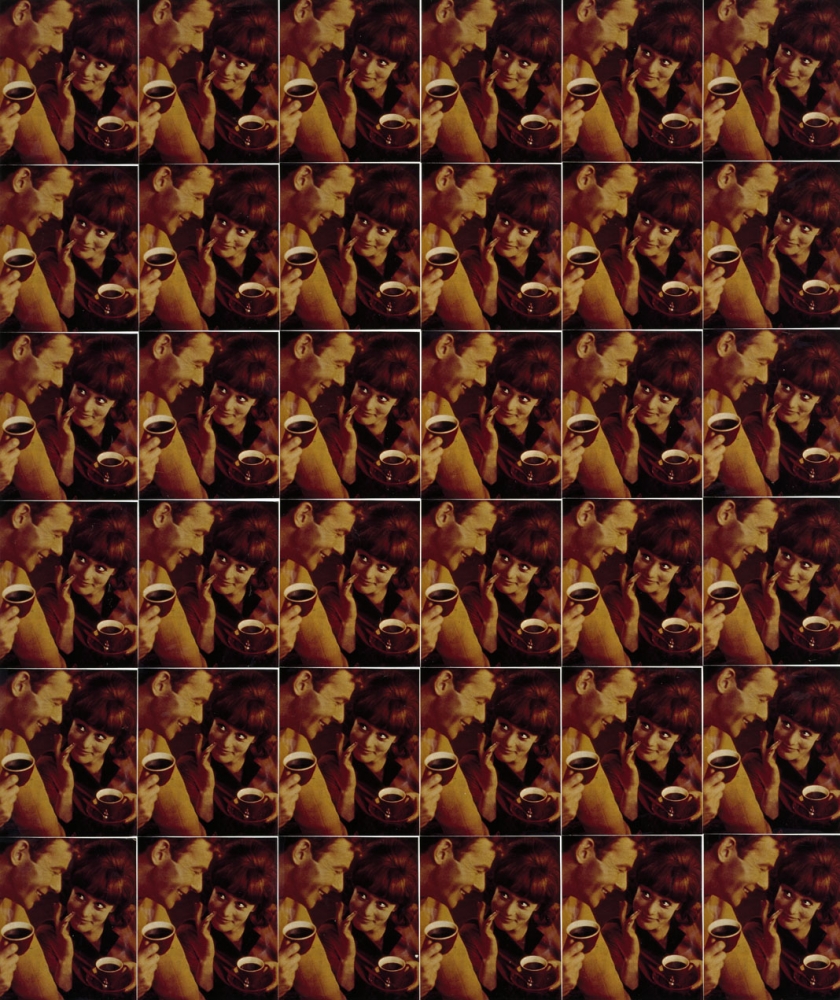 Despite his untimely death at the age of 24, Peter Roehr (1944–1968) produced over 600 works throughout the course of his career. Bridging Minimalism and Pop Art, and prefiguring the appropriation strategies that would emerge more broadly in the 1980s, Roehr used reproduction and repetition as a response to the consumer culture of Germany’s post-war ‘economic miracle’.

Peter Roehr: 1963–1966 centers on photomontage, for which the artist is best known. Between 1964 and 1966, Roehr made 127 of these works, each consisting of unedited images from advertisements that he cropped and arranged in identical gridded rows.  While early photomontages derived from a 1964 campaign for Maxwell Coffee, later examples incorporated imagery from Volkswagen and Chevrolet brochures. Reducing the creative process to the acts of selection and arrangement, Roehr intentionally voided his works of sentimentality and representational value. As he stated in 1964, “I alter material by organizing it unchanged. Each work is an organized area of identical elements. Neither successive nor additive, there is no result or sum.”

Roehr applied the same principles to his work in text and film. Drawn from diverse sources such as advertising copy, weather reports, nursery rhymes and horoscopes, his typewriter pieces presented found and isolated textual fragments which were displaced and repeated to the point of being neutralized; meanwhile, in Film-Montagen I-III, he extracted 22 clips from television commercials and stock footage and played each on a loop. Emptied of narrative and external reference, Film-Montagen I-III further demonstrated Roehr’s commitment to the use of repetition across media and as a means of dissolving consumer imagery of its message and meaning.

Peter Roehr was born in Lauenburg, Germany. He studied at the Werkkunstschule in Wiesbaden, and both lived and worked in Frankfurt, Germany.  His work is included in the permanent collections of the Museum of Modern Art, New York; Centre Georges Pompidou, Paris; Stedelijk Van Abbemuseum, Eindhoven; Museum für Moderne Kunst (MMK), Frankfurt; Städel Museum, Frankfurt; Museum Ludwig, Cologne; Daimler Art Collection, Stuttgart; and Kunstmuseum Stuttgart. Roehr was the subject of retrospectives in 1977 at Kunsthalle Tübingen, Stedelijk Van Abbemuseum and Frankfurter Kunstverein; in 1978 at Kunstmuseum Luzern and Museum of Modern Art, Oxford; and in 1991, 2004 and 2009 at MMK. Joint exhibitions with Charlotte Posenenske were presented at the Haus Konstruktiv, Zurich in 2010 and at the Chinati Foundation, Marfa in 2015.

The Peter Roehr Archive was donated in 2011 by Paul Maenz to the Museum für Moderne Kunst, Frankfurt. The archive has been fully digitized and is viewable online at www.archiv-peter-roehr.mmk-frankfurt.de